This year at Scientific Sessions 2018, Dr Jacqueline E. Tamis-Holland and Dr Harmony Reynolds addressed MINOCA and the existing knowledge gap. Here is a summary of the key points discussed at the meeting:

Approximately 5-10% of myocardial infarct presentations are suspected as MINOCA and available data suggests that they are likely be younger, females and have lower cardiovascular risk factors than myocardial infarct patients with obstructed arteries. The recent 4th universal definition of myocardial infarction published in 2018 highlighted that the diagnosis of MINOCA indicates that there is an ischemic mechanism responsible for the myocyte injury. Therefore, the MINOCA diagnosis is not applied to patients with clinical evidence of aberrant troponin changes as a result of non-ischemic or non-cardiac causes such as myocarditis or pulmonary embolism.

What causes MINOCA and what are the additional recommended tests?

The dilemma with treating MINOCA is delineating MINOCA presentations from those with troponin rise and/or fall due to non-ischemic and non-cardiac causes as this not feasible based on the presentation itself. When a patient is suspected as MINOCA following coronary angiography, the patient should be clinically re-evaluated with multiple potential causes in mind. The following are the key underlying causes and corresponding diagnostic investigations. 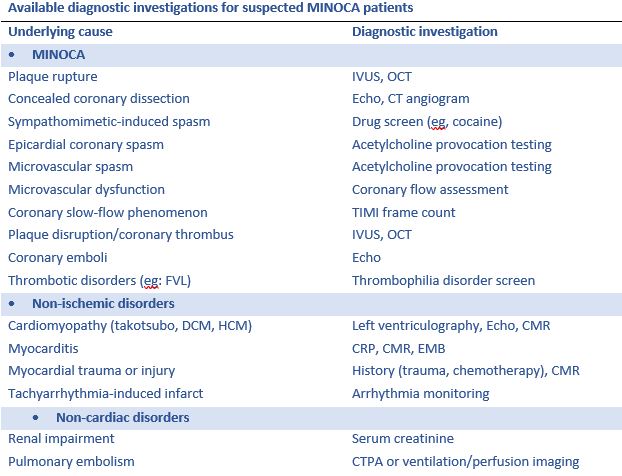 The available literature demonstrates that overall suspected MINOCA patients have a favorable prognosis compared to those with the classic myocardial infarction (associated with obstructive CAD). However, careful examination of literature shows suspected MINOCA patients have the equivalent 12-month all-cause mortality to those with myocardial infarction associated with single- or double-vessel coronary artery disease. However, the prognosis associated with MINOCA with only ischemic mechanisms in mind is yet to be studied.

There are no randomized trials addressing this question. However, a recent publication by Lindahl and colleagues stemming from the SWEDEHEART (Swedish Web-System for Enhancement and Development of Evidence-Based Care in Heart Disease Evaluated According to Recommended Therapy) registry provides the first insights into potential long-term prognostic benefit of medical therapy in the management of MINOCA. The authors have showed benefits of statins, angiotensin-converting enzyme inhibitors/angiotensin receptor blockers and beta-blocker therapy in MINOCA cohort.

The MINOCA BAT Trial (Randomized Evaluation of β‐Blocker and Angiotensin‐Converting Enzyme Inhibitor/Angiotensin Receptor Blocker Treatment in MINOCA Patients) is the first randomized clinical trial initiative in MINOCA patients and expected to begin enrollment in Australia and Europe in 2018 and also plans to expand enrollment to the United States and Canada in the next year. This will be a pragmatic prospective, randomized, multicentre, open-label clinical trial, with 2×2 factorial design. All outcomes will be analyzed using the intention-to-treat principle. The study aims to determine whether oral beta-blockade and/or ACEI/ARB impacts on MACE in patients discharged with MINOCA, where MACE is defined as the 4-year composite endpoint of all-cause mortality or hospital admission for AMI, ischemic stroke or heart failure.

As evident from Scientific Sessions 2018, the current available MINOCA literature demonstrates the importance of diagnosing and treating patients with MINOCA, although substantial knowledge gaps exist that require future research to identify optimal management.

Do you have any thoughts on MINOCA?

Since the first A-mode echocardiogram, there have been great revolutional changes and the use of noninvasive cardiac imaging has grown substantially during the past decade. Echocardiography and nuclear modality have been the primary imaging modalities for management in patients with different cardiovascular diseases. The introduction of cardiac magnetic resonance (CMR), computer tomography (CT), and three-dimensional (3D) printing, makes things quite different. Multi-modality imaging plays a role in all cardiovascular diseases that includes ventricular function, coronary artery disease, valvular disease, congenital heart disease, guidance for interventions, and vascular diseases. However, the use of each modality requires knowledge, expertise and forethought about cardiac diagnoses to avoid excess coast, inappropriate testing and to improve outcomes. Unnecessary duplication of investigations must be avoided for cost effective healthcare delivery.

For more than a decade, organizations such as the American College of Radiology and the American College of Cardiology Foundation have published criteria delineating the appropriate use of cardiac imaging. These specialty society guidance documents are designed to provide clinicians with recommendations regarding the use of imaging and are focused on reducing unnecessary and inappropriate testing. In response to rapid and unsustainable growth in the use of cardiac imaging procedures, various professional medical organizations have developed appropriate use criteria (AUC) to guide physicians and payers on effective use of these procedures. The AUC serves as a guide for physicians to incorporate symptoms, risk factors, and clinical history in selecting the patients for whom testing is most appropriate, based on the best available evidence or expert consensus; Furthermore, the AUC can help physicians steer other patients to alternative tests or no testing at all.

The AUC classify the appropriateness of testing across a range of clinical scenarios in 3 categories: “appropriate” (established value), “may be appropriate” (uncertain value), and “rarely appropriate” (no clear value). The AUC are intended to be used as part of a comprehensive disease management plan to maximize the value of care by minimizing unnecessary imaging and resultant downstream invasive procedures. (1). Appropriate use helps to avoid excess costs; enhances the value of imaging in risk stratification and decision making; and reduces radiation risk, particularly in women (2). Moreover, the principle of applying expert consensus criteria to choose the best testing strategy for each patient is widely accepted by payers, physicians, and patient groups.

CMR is a valuable tool for the evaluation of patients with, or at risk for, heart failure and has a growing impact on diagnosis, clinical management, and decision making. Through its ability to characterize the myocardium by using multiple different imaging parameters, it provides insight into the etiology of the underlying heart failure and its prognosis. CMR continues to develop across a broad range of clinical applications, and much can be expected of this technology in the future.