Approximately 15-20% of all coronary interventions are bifurcations1. Based on the overall Syntax Score, coronary artery bypass grafting is often recommended particularly in the setting of multi-vessel disease, diabetes and impaired left ventricular function. Once a decision to proceed with percutaneous revascularization is made, it is imperative that operators select the most appropriate revascularization strategy suited for an individual patient.

Briefly, the published data still recommends a provisional strategy as the default1. Of course, a two-stent strategy is commonly employed for bail out. An up-front two stent strategy is reserved for the following:

Over the course of the next couple of blogs, I will briefly review the randomized trials and steps of the different strategies. This month, my focus will be on DK-Crush.

DK Crush II was a randomized trial comparing DK-Crush to provisional stenting in symptomatic patients with a Medina 1,1,1 or 0,1,1 lesion. One-hundred and eight five were enrolled in each arm. The primary endpoint was major adverse cardiac events (MACE), namely cardiac death, MI and target vessel revascularization (TVR) at 5 years. It concluded that DK-Crush was associated with a lower 5-year MACE rate compared to provisional stenting. DK Crush III was a randomized trial comparing DK-Crush to Culotte stenting in symptomatic patients with a distal Left Main lesion that is Medina 1,1,1 or 0,1,1. Approximately, 210 were enrolled in each arm. The primary endpoint was a composite of MACE and TVR at 3 years. It concluded that DK-Crush was associated with a lower 3-year MACE rate compared to Culotte stenting. DK Crush V was a randomized trial comparing DK-Crush to a provisional strategy in symptomatic patients with a distal Left Main lesion that is Medina 1,1,1 or 0,1,1.  It enrolled approximately 240 patients in each arm. The primary endpoint was target lesion failure defined as cardiac death, target vessel myocardial infarction or target lesion revascularization at 12 months. It concluded that DK-Crush was superior at 12 months. The steps of this technique can be summarized in the illustration (Image A). It is noteworthy, that critical steps in any bifurcation technique include intracoronary imaging and proximal optimization (POT). Imaging allows appropriate determination of size of the vessels in question, length of the disease and characterization of the lesion before the planned strategy. It, therefore, permits the operator to perform the necessary lesion preparation if calcified. Upon completion of the procedure, imaging allows appropriate evaluation of the stent expansion and apposition with additional post-dilatation if need be. Proximal optimization is a fundamental step irrespective of the technique adopted. It permits the operator to expand the main branch stent to facilitate the remainder of the steps, prevent the wire from entering behind the stent struts, prevent stent compression and ultimately permit appropriate stent apposition. This in itself facilitates future intervention and reduces stent thrombosis. Many have added an additional POT before the second kissing inflation to facilitate crossing into the SB. It is important that fluoroscopic imaging is sharp to allow appropriate positioning of the non-compliant balloon at the proximal stent edge and at the neo-carina. Several techniques including “Stent Boost” and “Clear Stent” specific to each vendor are readily available. Finally, given the multiple steps in bifurcation stenting, radiation safety is imperative for any and all techniques. 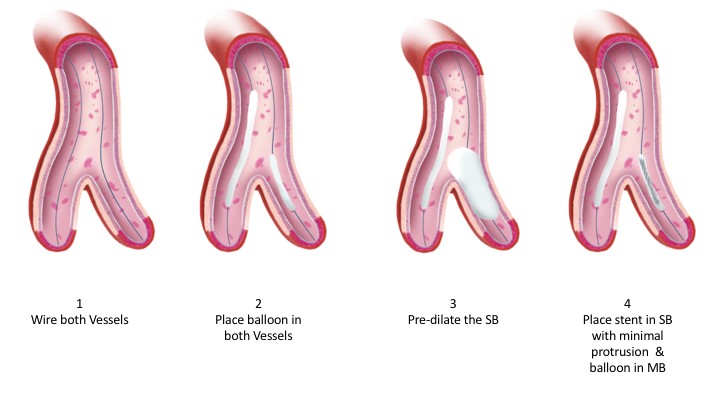 Illustrations are the production of Graphic Designer Dania Al-Shaibi (dn.alshaibi@gmail.com)