If you go to a party or a professional event, you won’t be surprised to find that alcoholic beverages are served. In fact, in most cases, it’s even expected. Alcohol consumption has been present throughout human history. So do its effects. Excessive drinking has been linked to many health risks, including high blood pressure, heart diseases, stroke, liver diseases, and digestive problems. However, the health effects of light-to-moderate drinking are still in dispute (1). Early evidence showed that light-to-moderate drinking is associated with beneficial effects such as reductions in coronary artery diseases and even in total mortality. This view has been challenged by a few recently published epidemiological studies, which show no direct relationship between the beneficial effects on the heart and light-to-moderate drinking (2). What is light/moderate drinking?

Why is there a discrepancy in health risks reports on alcohol consumption?

Confounding factors such as social-economic status, age, genetics, ethnicities, behavior and types of alcoholic beverages play big roles in influencing health effects. It’s not hard to imagine that a wealthy family has more medical resources and more options of choosing a healthy lifestyle, which has lower risks of cardiovascular diseases compared to a low social-economic status family that even consumes the same amount of alcohol. The alcohol metabolism rate differs in different age groups and different populations. The certain population lacks an enzyme, alcohol dehydrogenase, which metabolizes alcohol, that has adverse health effects when drinking alcohol. These confounding factors are important when conducting an epidemiology study. Not all alcoholic drinks are created equal. Bioactive phytochemicals, for example, polyphenols have beneficial effects which can be found in wines. Cocktails usually contain a large amount of sugar, and high sugar consumption are linked to many cardiovascular disorders. It’s hard to tease out the causal effects of light-to-moderate alcohol consumption and the health effects. Moreover, most of the reported works of literature are observational, which leads to more complications when trying to interpret the data.

Epidemiological study design has evolved rapidly in recent decades. Early studies were focused on interpreting results from limited resources. The lack of enough participants and missing specific details make it impossible to make a causal connection between alcohol consumption and health risks. In 2007, researchers started to encourage epidemiological studies to use large, prospective, and randomized trials when trying to understand the health effects of drinking (3). A recent review just published in Circulation: Heart failure questioned the relationship between alcohol intake and cardiomyopathy and heart failure (4). After analyzing current evidence, they suggest that there is no consensus on the absolute amount alcohol intake which causes cardiomyopathy and heart failure. Another group showed that low alcohol intake has no health benefits, and moderate alcohol intake is associated with adverse effects in heart (5).

To drink or not to drink. There is no one-size-fits-all solution. The jury is still out when it comes to the health effects of light-to-moderate drinking. Monitor your health and consult with your doctor regularly. If it’s not good for you, your body will tell.

In only few months, I leave my clinic where I have been seeing patients with heart disease for the past three years. It was not until I started discussing with them the transition to a new cardiologist that I appreciated the unique relationship we have built.  It has only been few years since we first met in in the Emergency Department in the middle of the night as they were having a heart attack, but somehow this journey feels longer.  I witnessed their heart attacks change their lives in many different ways, as they learned to cope, recover and carry on in life with a story to tell. Being one of the characters in their stories, I learned five lessons about life that will stay with me.

1- You can make any terrible event a wake up call or the beginning of the end.

A big heart attack or sudden cardiac arrest is arguably the most terrible event one could experience. As my patients recovered from such an event and came to see me in clinic, I could tell that the event changed them, either to the better or to the worse. While some lost weight, started training regularly, left their high stress jobs, or decided to travel the world, others became even more sedentary, gained weight, and started lamenting their bad luck and “missed opportunity” for good health.  It was striking to observe those two trajectories of opposite directions. Like my heart attack patients, when you are faced with a terrible event in life, you can either use it as a wake up call to do better afterwards or fall off a ledge and spiral down. You decide your own fate.

2- A supporting family is worth all the medicine of the world.

One patient after another, it became clear to me that the presence of a supporting family member that cares for you during difficult times is worth the most state-of-the-art medicine. It is that person that ensures that your food is low in salt and has no butter, that you do your daily exercise and not miss your medication, that you come to your appointments and ask all the right questions, or that simply hold your hand and tell you it’s going to be okay when things turn sour.

I met a 90 year-old woman who had a big heart attack and went for the most aggressive therapies. A year later she still shows to my clinic fully groomed and cheerful telling me she picked up dancing and life could not be any better.  I also met a 50 year-old man who after a small heart attack gave up on enjoying life or hoping for better future and couldn’t be convinced otherwise.

4- Faith, hope, and courage are your best friends when you’re not in control.

When patients are waiting for a high risk surgery or intervention, they simply are not in control of their fate. I found that those that fared well had three unique characteristics. First, they had faith in themselves, their doctors, or God. Second, they always hoped for the best. Third, they had the courage to face a difficult reality when things don’t go as well.  Whenever you’re not in control, let faith, hope, and courage always be your best friends.

5- Write your best story today because you never know when it ends.

While I learned so much from the stories of those patients who made it to my clinic, many did not, and their stories ended in the hospital. As you go through life, live every day to the fullest and write your best story page by page, because you really never know when it ends.

The new physical activity guidelines from DHHS were released, not coincidentally I suppose, on “Sneaker Day” at #AHA18. I walked up the 5th floor of McCormick place to hear Adm. Brett Giroir, MD, Assistant Secretary for Health present the update. I was excited to see this one, because I’m a lover of activity— running, yoga, strength training, dance, martial arts, hiking, swimming, etc. Activity makes me feel good, and I’ve seen the change in other people (friends, patients) who’ve become active. And because, as a clinician who works with underserved people, I love health promotion activities that are free. 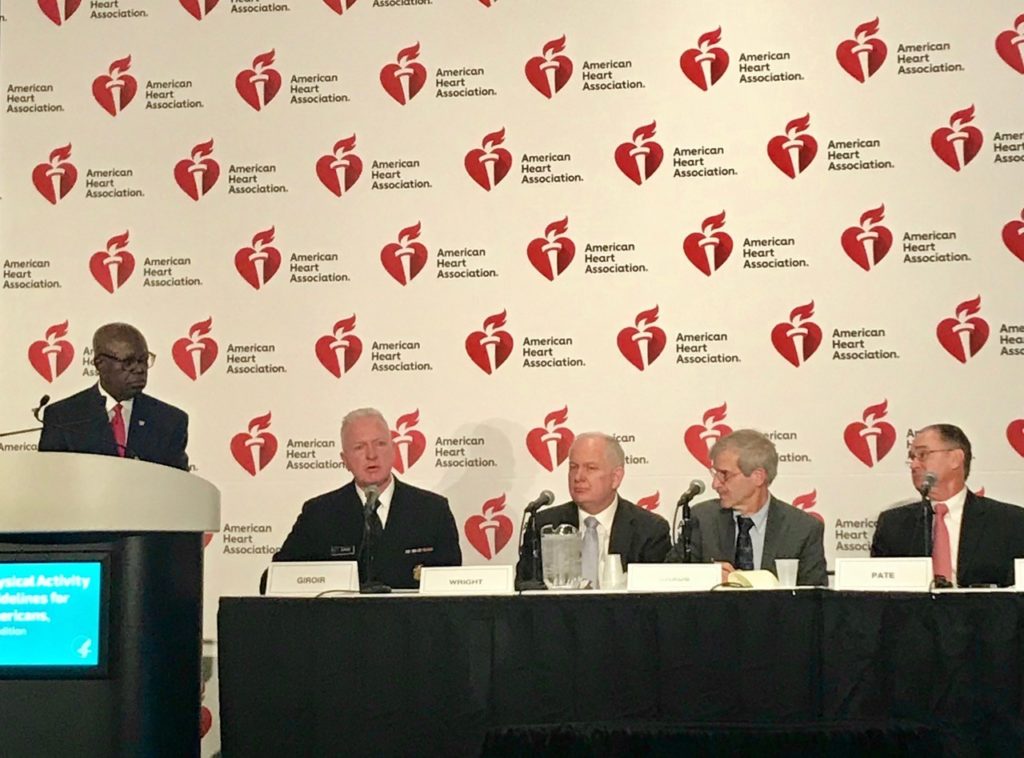 I was curious to hear what the approach would be. Much of the “big news” at AHA is related to drug and intervention trials. Physical activity is a different kind of topic— one that isn’t necessarily the primary domain of many of the attendees. How would this group from HHS fit in? Giroir said, “Our overarching goal is to transform the current sick-care system into a health-promoting system.” Here, here! Not only is this intuitively appealing, but it better aligns with value-based payment systems that are coming down from on high. We’ve heard a lot about trying to align financial incentives in less perverse ways, so let’s keep a watchful eye on that. I like interventions that are free— but there’s a big machine out there that doesn’t agree, and it can be hard to get the same kind of traction.

So that said, what’s in the new guidelines? There aren’t big shifts in the actual recommendations, but there’s an important change in the messaging. Just 26% of men and 19% of women meet the current guidelines. The bar in these guidelines isn’t high. This tells me that we need to work on systems. Schools, workplaces, and public spaces are low-hanging fruit. Chapter 8 of the guidelines also touches on faith-based settings and mass media campaigns. Dan Buettner’s The Blue Zones is an example of a program that’s ahead of the curve, working with communities to tweak infrastructures and build social communities to keep activity in the fabric of life. Michelle Obama’s “Let’s Move” project took a stab at the public messaging approach. What else could we try? In a Viewpoint article for JAMA, Giroir & Wright make some systems suggestions, and also touch on the potential for wearable tech and workplace initiatives to move the needle. These are well-trodden paths, and we’re still waiting for strong evidence of efficacy. Personally, I’d like to see rules and norms encourage activity-friendly clothing and footwear in professional settings (#SneakerDay every day!?). Can we make it “OK” to stand for a bit when our tracking devices remind us that we’ve been sitting for an hour? Can we support activity with locker rooms at work? Better and more accessible training for healthcare workers on exercise prescription? More clarity on the roles and qualifications of fitness professionals? #AHA18 had a heart failure “Hackathon” this year to generate novel ideas– can we come up with some innovative ways to improve implementation of the cheapest, most effective treatment we have for poor health?