The Senior Capstone presentation is considered a milestone for third year internal medicine residents at Emory.  Residents have wide latitude in choosing a topic and are encouraged to delve into the literature in an area related to their career interests.  Some of my co-residents pursuing cardiology have discussed advancements in LVAD technology, reviewed seminal trials for PCI, and explored data behind the DASH diet.  I wanted to stray from the beaten path and wade into the medical humanities.

Here’s how my presentation begins: Slide 1. My talk today is called medical archaeology: the art of diagnosis and the diagnosis of art.  My goal is to spend some time at the intersection of medicine, art, and history, and see what lessons we can learn about making observations and deciphering a diagnosis. 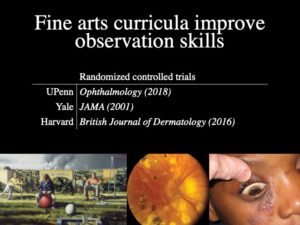 Slide 2. A couple years ago, the University of Pennsylvania started teaching their medical students how to study paintings.  The goal was to practice observing and describing the human form, skills that are fundamental to any astute clinician.  Last year, they published a randomized controlled trial. Here’s how it worked:

During their ophthalmology block, half the students went to the Philadelphia Museum of Art to get taught by professional art instructors.  Afterwards, they were tested on their ability to describe three types of images: paintings, retinal images, and clinical photos.  Students in the intervention arm scored significantly better in each of these categories compared to the control arm.

It turns out they’re not the only ones doing this.  Yale published a similar randomized controlled trial in JAMA back in 2001. Meanwhile, Harvard has been sending its dermatology residents to the Boston Museum of Fine Arts. We don’t have time today for a field trip to the High Museum, but what we can do is take a virtual tour of art and history as it relates to medicine.

Midway through my talk is an interesting example about an ancient drug we still use in modern cardiology. Slide 3. Over the centuries, often by accident, paintings have captured clues that might be relevant to trained medical eye.  Sometimes, the striking thing about a painting is not what’s portrayed, but how it’s portrayed–the style and technique.  Here, we’re going to use art to give us clues about its creator.

Our next artist was a Dutch painter who was known around town as the “redheaded madman.” In letters to his brother, Van Gogh complained of chronic abdominal pain, hallucinations, and insomnia.  He was hospitalized multiple times for episodes of insanity.  During one of these spells, he famously cut off his ear.  Doctors at the time diagnosed him with epilepsy.

At the age of 37, Van Gogh died of suicide–shot himself in the chest. Since his death, the scientific literature on Van Gogh has become as prolific as the artist himself. And while doctors back then called it epilepsy, doctors of the modern era have expanded the differential. A 1947 paper was the first to propose bipolar disorder, pointing out descriptions of manic and depressive episodes. A JAMA manuscript from 1990 argued for Meniere’s disease, suggesting tinnitus drove Van Gogh to perform surgery on his own ear. According to a 1991 article in the BMJ, Van Gogh may have had acute intermittent porphyria, a disorder involving heme synthesis which causes attacks of abdominal pain and psychiatric symptoms. 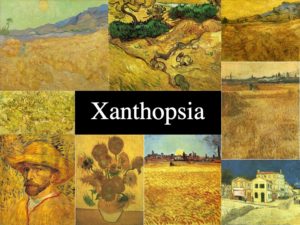 Slide 4. But the most well-known theory comes from examining Van Gogh’s artwork itself.  In fact, many of you probably use Van Gogh’s artistic style as a mnemonic to help you remember signs of digoxin toxicity.  In his later years, as his health got worse, Van Gogh’s color palate turned intensely yellow, suggesting he may have developed xanthopsia or yellow vision. Slide 5. The swirling halos in pieces like Starry Night or Night Café are also big clues.  Digoxin is known to cause blurry outlines, a type of halo vision.  Recall that GI side effects are also common, consistent with his chronic nausea and abdominal pain. Slide 6. If you’re a real trivia buff, you might know that digitalis was originally extract from the Fox Glove plant.  This plant was widely used during the 19th century not just for cardiac problems, but also for various neurologic and psychiatric ailments.  So it’s likely that Van Gogh’s doctors gave him Fox Glove to treat his epilepsy.  In fact, on two separate occasions, Van Gogh painted his personal doctor posing with Fox Glove.  Once again, the proof is in the painting. John Chen, MD is an internal medicine resident at the Emory University School of Medicine and Grady Memorial Hospital in Atlanta, Georgia.  After completing residency, he plans to pursue fellowship training in cardiology. @JohnChenMD