The concept of catheter ablation for atrial fibrillation (AF) was pioneered by Michel Haissaguerre from Bordeaux, France. In their landmark paper, Haissaguerre et al. described that the majority of triggers for atrial fibrillation (AF) can be mapped in the sleeves of muscles that extend into the pulmonary veins, and ablating these triggers leads to freedom from AF 1. This approach ultimately evolved into pulmonary vein isolation which remains one of the most commonly performed electrophysiological procedures today.

Essentially, the two common approaches involve radiofrequency ablation (RFA) or cryoablation (CRA). In general, most of the catheter guidance in RFA is with the help of electroanatomical mapping, and point by point lesions are made by heating the tissue, but it has a longer operator learning curve. CRA requires more extensive fluoroscopic guidance and can create circular lesions in a single step using a balloon that causes cellular necrosis by freezing the tissue 3. Since these two techniques differ in the source of energy, fluoroscopy time, need for electroanatomic guidance, learning curve, and procedure time, an important question arises: what is the best energy source to perform catheter ablation?

Multiple randomized controlled trials and observational studies have attempted to answer this question. A recent meta-analysis of 14 randomized trials and 34 observational studies that included 7951 patients undergoing CRA vs 9641 patients undergoing RFA showed that over a mean follow up of 14 ± 7 months, CRA reduced the incidence of AF recurrence as compared with RFA (RR 0.86; 95% CI 0.78-0.94; p=0.001) . While the rate of phrenic nerve palsy was higher in CRA, rates of other complications like pericardial effusion, tamponade, and vascular complications were lower as compared with RFA. Interestingly, CRA procedure time was shorter than RFA by almost 20 mins4.

While this meta-analysis is based on results of multiple randomized and observational studies done under controlled settings, there is a paucity of real-world data comparing CRA vs RFA. This important question was addressed by Friedman et al in their analysis of Get With The Guidelines® – Atrial Fibrillation (GWTG-AFIB) registry 5 which gives a comprehensive understanding of the state of union regarding CRA vs RFA for AF (Figure 1)**.

It is a large hospital-based quality improvement registry that is based on a partnership between the American Heart Association and Heart Rhythm Society and contains data on patients with AF or atrial flutter who have an overnight stay at a hospital in the United States 6.

What are the differences in real-world patient and peri-procedural characteristics and in-hospital outcomes between CRA vs RFA?

This study gives an important insight into the contemporary practice of CRA vs RFA in the United States. Overall, despite the increasing popularity of CRA, RFA still remains the most common type of catheter ablation for AF. It appears that patients undergoing RFA are in general more complex with a history of prior ablation or persistent AF, and more likely to have co-morbidities like heart failure and obstructive sleep apnea. These differences in the patient characteristics like history of persistent AF may explain the observed differences in complications with RFA. Another interesting observation from this study is that more RFA were performed at academic/teaching hospitals (91.7% vs 83.8%) and the likely explanation is that the procedure requires more time and expertise than is generally available at larger academic centers.

In future a comparison of longitudinal outcomes like recurrence of AF, quality of life, AF symptoms, incidence of heart failure, incidence of stroke, incidence of thromboembolic complications, AF related hospitalizations, cost of care and mortality, between CRA and RFA will be important. 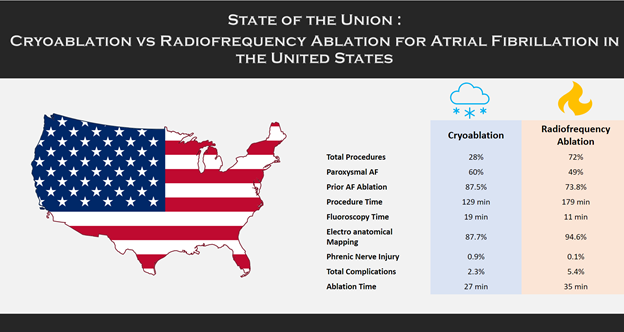 Figure 1: Comparison of patient and periprocedural characteristics and in-hospital complications between cryoablation and radiofrequency ablation from Get With The Guidelines® atrial fibrillation registry.

**This study was funded by a GWTG-AFib Early Career Investigator Award.