(3) The NIH Director. Statement on the Retirement of Dr. Hannah Valantine. 9-1-2020. https://www.nih.gov/about-nih/who-we-are/nih-director/statements/statement-retirement-dr-hannah-valantine

Originally from The Gambia, West Africa, Hannah Valantine moved to London, where she studied Biochemistry and then obtained a medical degree from St. George’s Hospital Medical School in 1978 (1). She completed her post-graduate work in cardiology at two hospitals in London: Brompton and Hammersmith (2). She moved to the United States, where she was awarded an NIH Director’s Pathfinder Award for Diversity in the Scientific Workforce (2). She became a fellow and worked her way up to being a Professor of Cardiovascular Medicine at the Stanford University School of Medicine before being appointed as Senior Associate Dean for Diversity and Faculty Development in 2005 (1).

In 2014 Dr. Valantine was appointed as NIH’s first Chief Officer for Scientific Workforce Diversity, a new position with the entire focus being on diversity in biomedicine (2).

During her time at the NIH, she established the Distinguished Scholars Program, which has had a dramatic, positive impact on the diversity of tenure-track investigators at NIH (3). To implement the recommendations of the NIH Equity Taskforce, she developed and implemented the first NIH Workplace Climate and Harassment Survey (3). This scientifically rigorous survey achieved a high response rate from NIH employees, contractors, fellows, and trainees who will have a lasting impact on institutions around the United States (3).

Dr. Valantine also designed the Faculty Institutional Recruitment for Sustainable Transformation (FIRST) program which is aimed at creating cultures of inclusivity at NIH-funded institutions (3). She also pioneered a program to mentor and support scientists from diverse racial and ethnic backgrounds in writing effective grant applications (3).

In September 2020, Dr Valantine’s retirement was announced after what has been a truly remarkable career (3). Dr. Valentine’s career embodies the representation that institutions around the country and world are striving to have, and she is a role model for what other underrepresented scientists can achieve. Her work has and will continue to open doors for people in underrepresented groups in science and medicine.

This is part of #BlackCardioInHistory series.  #AHAEarlyCareerVoice is partnering with #BlackInCardio to feature a series of profiles of black/African American Cardiologists for #BlackInCardioWeek2020.  For more information: blackincardio.com 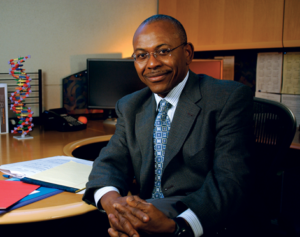 Dr. Charles Rotimi (1957- ), originally from Benin city, Nigeria is the Director of the Trans-National Institutes of Health (NIH) center for research in genomics and global health (1, 2). Dr. Rotimi obtained his undergraduate degree in biochemistry from the University of Benin in Nigeria before immigrating to the United States for further studies (1). He started his education in the United States at the University of Mississippi, where he obtained a master’s degree in health care administration and then a second master’s degree and a doctorate in epidemiology from the University of Alabama at Birmingham School of Public Health (1). Dr. Rotimi was the director of the National Human Genome Center at Howard University before embarking on a new journey at the NIH (1).

In 2008  Dr. Rotimi joined the  NIH, He was instrumental in establishing the trans-institute Center for Research on Genomics and Global Health, with its mission to advance research in the role of culture, lifestyle, and genomics in disease etiology, health disparities, and variable drug response (1, 3). His lab develops genetic epidemiology models and conducts epidemiologic studies that explore the patterns and determinants of common complex diseases in human populations with particular emphasis on populations of the African Diaspora (1).

In 1994, his team published the first genome-wide scan for hypertension and blood pressure in African Americans and type-2 diabetes in West Africans (4). One important piece of this study is that Dr Rotimi and his team compiled genomic data from ~6,000 individuals and came up with 21 different global genetic ancestries (4). The research demonstrated that more than 97 percent of humans have mixed ancestry (4), indicating that the traditional race labels such as “Black,” “white,” and “Hispanic” are insufficient ways to classify humans.

Dr. Rotimi followed this up with another paper published in 1997 that examined over 10,000 samples to estimate the impact of environmental factors on geographically separated Black populations in the United States, Caribbean, and West Africa (5). This study found that Black men and women in the United States had significantly higher rates of hypertension compared to the Caribbean, which had higher hypertension rates than West Africa (5). The increased rates of hypertension track with traditional migration patterns and suggest that environmental factors, including psychosocial stress, play a large role (5). With such a distinguished career, it is of no surprise that Dr. Charles Rotimi has been elected on to many boards, being bestowed with an honorary professorship at the University of Cape Town in South Africa and even more impressively being elected to the National Academy of Medicine in 2018 (1). Dr. Rotimi is a Senior Investigator within the Intramural Research Program at the National Human Genome Research Institute (NHGRI) of the NIH (1). He has won the NIH Director’s Award for leading the establishment of the Human Heredity and Health in Africa (H3Africa) Initiative (2012) and he is the first person of African ancestry to be elected to the Board of the American Society of Human Genetics (1). He was also a recipient of the HudsonAlpha Life Science Prize in 2018 (1).